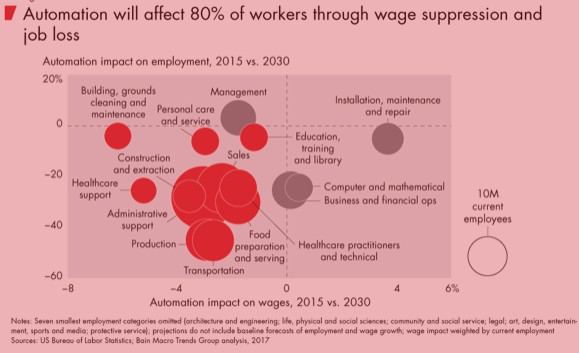 There’s a lot of onion to unpeel in this Bain & Company infographic about the impact of automation on key U.S. sectors in the coming years. There are a few workplace surprises–libraries, grounds maintenance and personal care–hidden among the obvious contenders for automation’s employment slayers such production work, business and financial operations and transportation.

Bain estimates that by 2030 automation could eliminate between 20 percent and 25 percent of U.S. jobs. Bain describes this new period as “The Great Transformation,” noting that key characteristics of this period will be “the changing ages and stages of life, the rise of platforms and post-globalization in geopolitics.” It also will include the growth in use of a new hybrid robot, the cobot.

“Cobots, which sit alongside humans to enhance labor productivity in manufacturing, are an example of how companies are closing the cost gap. These helper robots cost less than one-quarter the price of traditional robots, and by 2013, they were already cheaper than human workers in every advanced economy and most developing economies,” according to Bain.

One of the reasons for the drive for automation in the U.S. is not just to boost productivity but also to supplement our shrinking labor force. Bain estimates that U.S. labor force growth will slow to 0.4 percent per year in the 2020s. The trend toward later retirements by Baby Boomers and Gen Xers won’t mitigate that looming problem, although adding more immigrants to the U.S. labor force mix might do that, a thought to consider for all those anti-immigrant advocates.