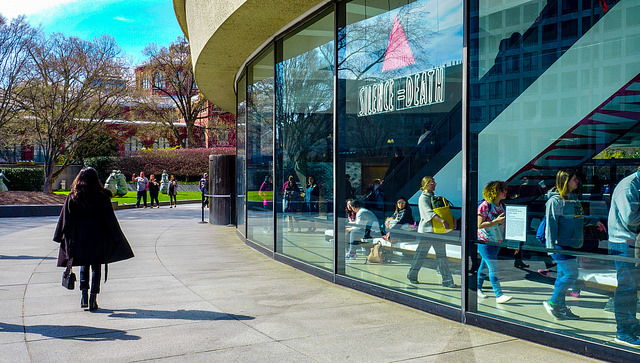 The neon sign nearly blends into the lively architecture and bustle of the Hirshhorn Museum and Sculpture Garden. The Silence = Death sign, and its raw pink triangle, dates to 1987,  a time when AIDS was a certain death sentence and not the chronic disease it is today. Its bold neon triangle lights up the glass wall of the Hirshhorn but it is still the message that moves, “Silence = Death.”

The Silence = Death sign is part of a Hirshhorn exhibition, Brand New, that looks at art in the 1980s through consumer culture–advertising, cable television and marketing. Television had become a medium that allowed for expression in new ways, and artworks transitioned even further from the museum wall into the marketplace. “Like today’s celebrity influencers, artists crafted branded personas to both market themselves and as a form of creative expression.”

Thirty years after “Silence = Death” became a sign of the times, it now is both history and art. Unfortunately, the disease behind it, of course, has not dissolved into history. The good news is that silence is no longer a common reaction to AIDS and HIV, but the fact the disease lives on remains a persistent and troubling shame.